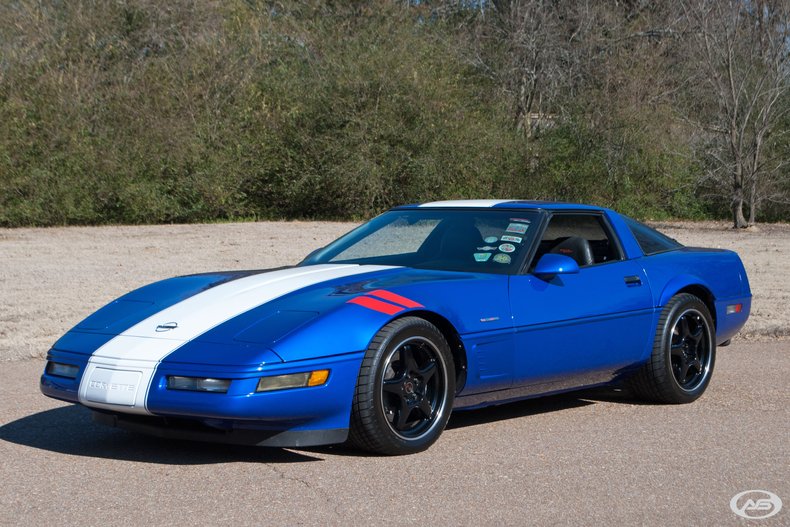 In 1963, Chevrolet built five very special competition Corvettes. Known as the “Grand Sport”, this factory built racer would take a special place in history, inspiring the racing community with the speed, agility and reliability of the new second generation Corvette. In 1996, GM would pay homage to those famous race machines by releasing a new Grand Sport. Based on the modern C4 platform, one thousand 1996 Grand Sport tributes were born, including 810 coupes and 290 convertibles.

Conservatively rated at 330hp, the modern Grand Sports LT4 was the most powerful production small-block V8 ever placed in a Corvette. Mated to a ZF 6-speed manual transmission, this powertrain produced a high performance driving experience. That performance was controlled through a sophisticated four-wheel independent suspension that included four-wheel disc brakes with ABS and ASR (traction control). The 17x11 inch black wheels on the rear of the Grand Sport coupe were carried over from the ZR1, which really gets your attention when viewing the car from the rear – the view you are most likely to get if you decide to challenge a Grand Sport driver!

Performance numbers for this car have you going from 0-60 in 5.2 seconds, completing the quarter mile in 13.7 seconds and topping out around 172 mph. On the skid pad the car achieved 0.88g with those huge sticky tires. All this in a car that could give you 25 mpg on the highway during you next Corvette Club outing!

Art & Speed is pleased to present this beautiful Grand Sport Coupe from the collection of its third owner. This well cared for southern car has been kept in a climate-controlled garage over the last 12 years, and has been used sparingly for special activities. The 124th Grand Sport built, this car has a clean history and comes with its factory build sheet, sales brochure and all manuals. It also has been treated to the following owner enhancements:

All Grand Sports were finished in Admiral Blue with a white racing stripe. The distinctive dual fender hash marks in red are a throw-back to the 1963 race cars of the Mecom Racing Team.

The beautiful black leather interior is appointed with six-way power adjustable seats, which include lumbar support and are embroidered with the iconic “Grand Sport” name. Driver controls are racecar inspired, and are guaranteed to produce a smile. With just over 59k miles on the odometer, this superbly maintained Corvette can provide years of great fun for its new owner.