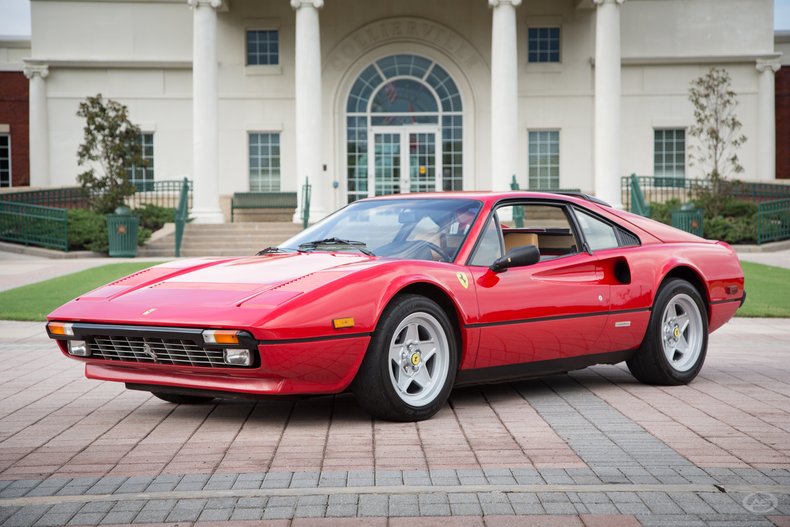 Perhaps no other automobile defines Art & Speed as the iconic Ferrari 308. These timeless Pininfarina designed masterpieces are certainly works of art, beautiful and quick, and fingertip-light to drive. A piece of drop dead gorgeous automotive art, that is even better from the driver's seat.

Debuting at the 1975 Paris Auto Show, the Scaglietti built coach was an immediate international hit. Replacing the popular 246 was a tall order, but with technical assistance from three time Formula One World Champion Niki Lauda, Ferrari delivered a Prancing Horse for the ages. The first 800 or so were vetroresina, or fiberglass bodies, now trading hands in the $250-300,000 range.

These iconic Italian sports cars came with a tubular chassis and spirited, transversely mounted aluminum 2.9 liter V8 engine, culminating in the 250hp fuel-injected Quattrovalvole (QV) in 1982. This engine was the basis for great things to come, serving as the base powerplant for the 288 GTO and F40. QV production ran from 1983 until the 308 ended its model run in mid 1985. Although a little over twelve thousand 308s in various forms were built, only 3,042 QVs were assembled, with GTBs making up only a small percentage of those numbers.

Chassis #56545 is a full Euro-spec 1985 308 GTB QV, from the end of a successful run. This particular GTB, covered in original Rosso Corsa (Racing Red) paint, retains its European pedigree with distinctive crema leather and luscious red carpeting. While slightly federalized for import to America, #56545 retains the small front/rear bumpers and Vitaloni mirrors, and its original small front valence or spoiler. Research is ongoing but we believe #56545 to be one of only three euro spec 308 GTBs currently in North America. Regardless, experts believe less than 250 GTB QVs were built total. Besides the limited Vetroesinas, no other 308 offers the proven collectibility as this extremely rare example.

This European spec, low mileage, last year 308 GTB pushes all the right buttons. It just had a major service at Ferrari of Atlanta, including replacement of timing belts and tensioners, a rebuilt steering rack, restoration of its 16 inch (not metric) wheels, and a complete detailing of the interior and engine bay.

Contact Art & Speed Classic Car Gallery soon to secure this exceptional and highly collectible Ferrari. While there are no guarantees in life, two things stand out about this car. One, the investment upside is obvious, and two…it won't last long.