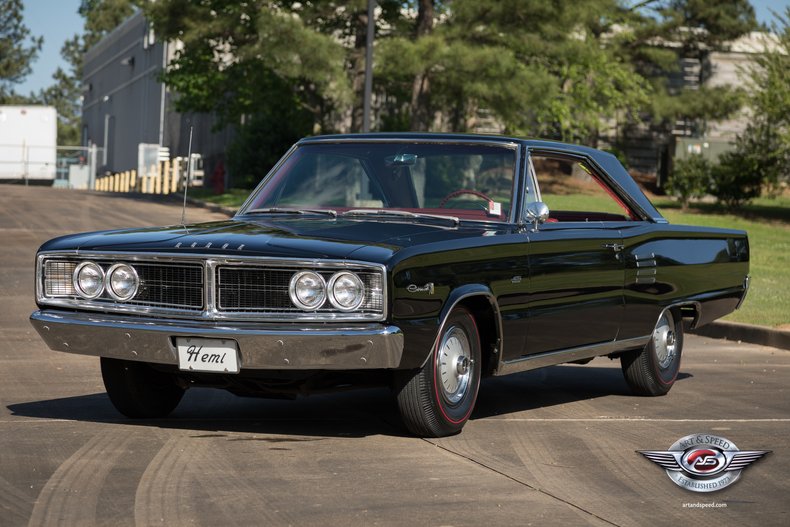 As fast as it is on the road, this '66 Dodge 426 Hemi Coronet 500 will move even faster out of our showroom. This car has been in one private collection for more than 30 years, and shows just over 17k miles. With one respray prior to introduction to this collection, this Coronet is a remarkable and beautiful survivor. A rare and desirable find.

Hot Rod magazine called it “one of the fastest and most fantastic sedans ever.”

Dodge bragged in their own ad copy, calling it the “hottest thing since the cast-iron stove.”

Motor Trend dubbed the acceleration, from 0-60 mph in about six seconds, “absolutely shattering.”

Ford pouted about the power of the 426, and 1965 production numbers were too low for Chrysler to use the HEMI in NASCAR racing. So, for 1966, Chrysler offered a street version of the 426 V8 to the public with a 90-day warranty. Officially rated at 425hp, the numbers were likely closer to 460hp. It came standard with the fantastic three-speed TorqueFlite automatic transmission and very few options. You want A/C? Open the wing vents—no charge!

This is a racecar, plain and simple. Burn rubber. Burry the needle. And a plain and simple car. No hood scoop, no stripes, no lettering, just one discrete “426 Hemi” badge on the front fender to warn of the beast that lurks beneath the Coronet's hood. Before the guy in the next lane can get a clue, the car will be long gone.