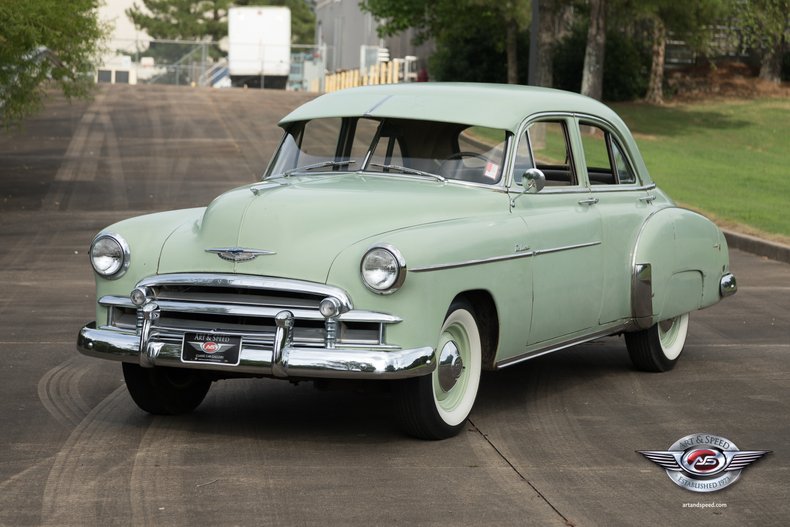 Great 1950 Styleline Deluxe survivor. Like a visit to Grandmas!

In 1950, Chevrolet sold a record-breaking 1.5 million cars, thanks in large part to the Deluxe. The Deluxe range offered a balance of style and luxury unavailable in the base Special series, and was Chevy's sales leader from the late forties to the mid-fifties.

This 1950 Chevrolet Styleline Deluxe is an incredible survivor and holds the same allure today that it did nearly seventy years ago. This great survivor features the optional 235 ci straight six engine, which went on to become the “Blue Flame six,” and the two-speed Powerglide automatic transmission. The bigger 235 had hydraulic lifters and a higher-lift cam, and made 105 hp compared to the Special's 216's solid lifters and 92 hp. The 235 ran quieter, sparing Chevrolet owners the annoying tappet clatter they'd endured for years.

In daily operation, the two-speed Powerglide only operated through a single speed, the theory being that the variable ratios in the torque converter were enough for all driving needs. It was possible for the driver to select "low" range manually.

When you come in for your test drive, see if you don't agree with the quiet and agreeable personality of this engine. Then notice the Powerglide experience. If you're already familiar, it's just like you remember, right? If this is your first experience, you'll marvel at how capable it is.

Dressing up this Styleline Deluxe is a trim strip of stainless down the side, with “Deluxe” script on the front fender. Chrome gravel guards and fender skirts dress up the rear quarters. Notice also the stainless moldings around the windshield and rear window. While not a Chevrolet option, the external windshield visor was a popular era addition and a real point of pride. It protected the driver from glare off the metal dashboard, and made a statement about the owner.

This '50 Chevy is ready to drive and go just exactly as is. Fire it up, and off you go. It also offers great potential for modifying as a sleeper, performing a complete restoration, or making extensive modifications. If your family history parted ways with a 1950 Chevy Deluxe at some point in the past, this is your chance to reconnect.

Thank you for your interest! We will get back to you soon.
Speed Digital