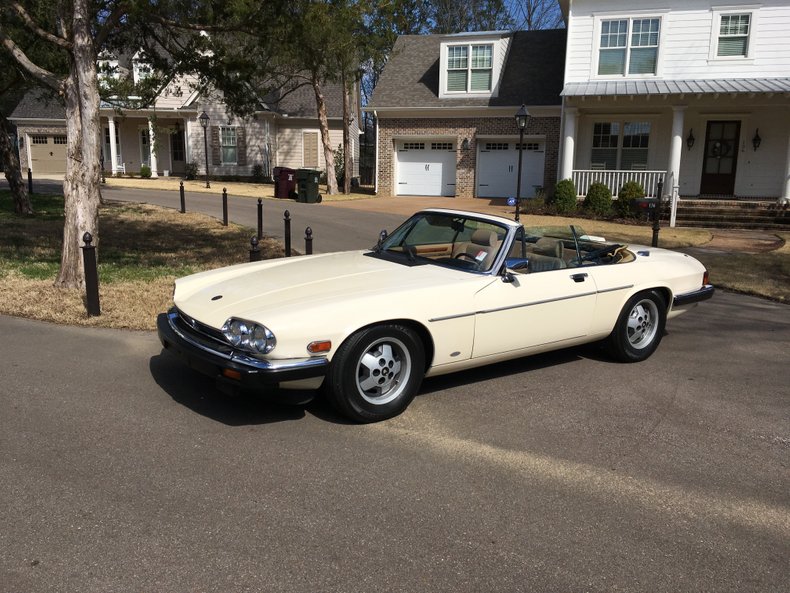 This 1987 Jaguar XJ-S V12 convertible is one of less than 2,000 specially modified Hess & Eisenhardt conversions. Convertibles had been attacked as unsafe for years (remember how the '76 Cadillac Eldorado was to be America's last convertible?), and threatened with extinction. Jaguar succumbed to fear and played it safe, designing the XJ-S as a coupe only. But the ban was a bluff, and Jaguar needed convertibles, fast!

Enter Ohio based Hess & Eisenhardt Coachbuilders. Hess & Eisenhardt had built special vehicles for presidents, kings, and queens, and now, Jaguar. According to a Jaguar website, "The Hess & Eisenhardt convertibles have two separate fuel tanks, positioned to allow for the roof to fully retract. The process of converting the stock Jaguar XJ-S Coupe into the H&E Convertible included the post-production removal of the roof, cutting the body in several sections, the addition of steel reinforcements behind the driver's seat, and 20 pound weights placed just behind the headlights to eliminate harmonic resonance caused by the significant modifications to the car. H&E XJ-S convertibles are identified by two small badges located just behind the front wheels."

Top up, it's challenging to distinguish the H&E convertible from the convertible Jaguar produced later. Top down, however, the H&E convertible is sleeker because the unpadded top folds completely into the body, leaving a long, smooth line. It's arguably one of the best looking Jags out there.

Inside, this car shows a nice soft patina, with a few blemishes on the leather and in the dash. The car has A/C, cruise control, variable speed wipers, power steering, power windows, power locks, remote mirrors, and a trip computer. In all, with the barest sprucing, you can have a rare, great looking Jaguar to drive and enjoy.