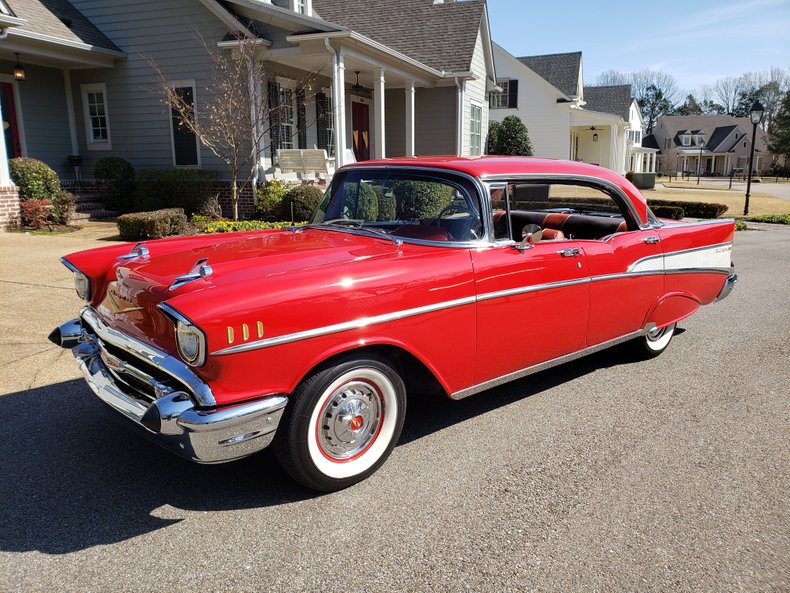 If you're looking for something different, still stylish, and maybe even a little practical, how about this lovely and relatively rare 1957 Chevy Bel Air Hardtop Sport Sedan? Chevy produced more four-door models than any other body style in 1957, but it is not often you see a four-door hardtop version in the wild, and this one is exceptional.

The Bel Air four-door sedan offered six-passenger comfort with a modicum style extending throughout the entire lineup, which was every bit as luxurious and stylish as its two-door brothers. Unfortunately, the practicality of four doors made them the workhorses of the fleet, which also meant they were used and abused, so many didn't survive past the '70s.

The two-door and specialty models were saved for their popularity with hot rodders and collectors, though you can still see some four-doors at shows now and then. However, it is much rarer to see the distinctly elegant four-door hardtop sport sedan — so much so that many people don't even know they existed. Its unique roofline was only available on this Chevy model. Reminiscent of the Cadillac or Buick, it is what makes the sport sedan a sought-after, rare car to own today.

The fit and finish on this example are impressive. The paint job is older but of excellent quality and is buffed to a high-caliber shine. The chrome and stainless probably cost a fortune to restore/replace, and all of it remains in very good condition. Details include beautiful chrome bumpers fore and aft, and those trademark bullet-shaped hood ornaments.

The gauges are just as flashy as in any other '57 model, including the separate pods for fuel level and temperature above that ribbon of bright metal trim. There is also an original heater/defroster unit and excellent glass throughout the cabin. The trunk offers a reproduction rubber mat with plenty of room for luggage and car show goodies.

There are signs of regular maintenance and careful ownership throughout the tidy and clean engine bay. Wearing corporate Chevy Orange enamel, the engine looks right at home. Even things that generally get replaced like the big valve covers, air cleaner assembly, and exhaust manifolds are correct. You will also spot an original generator, but it has been converted to 12-volts judging by the modern battery.

The PowerGlide automatic transmission is smooth and torquey. The two-speed shifts firmly right about the moment you think it won't. From there, the strong-running six-cylinder pulls this car around effortlessly at highway speeds.

The suspension rides and handles quite well, with a polished feeling you wouldn't typically expect from a vintage Chevrolet. It's quite clean underneath, and it sits on a set of appropriate-looking 205/75/14 whitewall radials wrapped around steel wheels with stock hubcaps that really dress it up. Disc brakes on the front are a worthy and accepted upgrade to stopping this classic.

Don't make the mistake of overlooking this sedan. If you're in the market for a 57 Chevy that stands out from all the others, this one should be a consideration. These four-door sport sedans don't come up very often. This one is a solid example of why the '57 Chevy is still one of the most sought after collector cars.

Thank you for your interest! We will get back to you soon.
Speed Digital