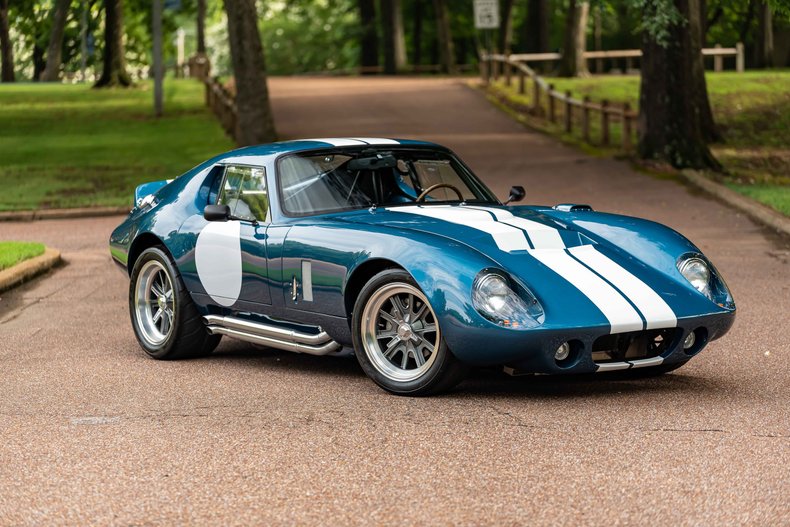 In 1959, Carroll Shelby won fame by being the first American driver to win the prestigious 24 Hours of Le Mans, catapulting his career into car design. If you've seen Ford v. Ferrari, you know the history of the GT40, but its predecessors — the AC Cobra and the Daytona Coupe — were highly successful as well. Shelby found the Cobra's open cockpit created too much drag to win at Le Mans and created the Daytona Coupe to win the GT class. With only six Coupes built, Shelby achieved his goal before concentrating on the GT40. The remaining coupes are some of the most sought-after American collector cars, worth millions!

The good part is you don't have to be a billionaire to own a fantastic recreation of the Shelby Daytona Coupe. Even better, you can drive this one on the street!

Art & Speed is proud to offer this Factory Five Racing (FFR) rendition of the 1965 Shelby Daytona Coupe. Four years of engineering and design went into this kit before the first production car hit the streets in 2000. Suitable for street use, this second-generation Daytona features all the FFR components and modern technologies to make it more street-friendly. With less than 300 miles on this fresh build, completed in 2019 with all brand-new parts and tons of extensively detailed documentation, you can drive this one with confidence.

Featuring the correct Guardsman Blue with Arctic White stripes and gumball, it is ready for your favorite number! The paint is in perfect condition after months of bodywork, painting, wet-sanding, and polishing. All of the stainless and polished trim is brand-new, including the side pipes. Wrapped with Toyo Proxes R888R tires (255/40R17 front, 315/35R17 rear), the reproduction Shelby Halibrand wheels feature knock-off style spinners.

Under the flip-up front cap is a tidy engine bay with a carbureted V-8 Ford 347ci stroker engine decked out in Cobra gear, putting out 367 horsepower and 380 lb-ft of torque, which is sure to get this lightweight down the road in a hurry. Fuel is delivered through a 600cfm Quick-Fuel carb atop an Edelbrock intake before spent gasses are expelled out of Jet-Hot coated headers. Power is transferred to a Tremec TKO600 five-speed manual transmission before reaching the 8.8-inch limited-slip differential. With plenty of power on tap, the engine is strong, and the drivetrain performs as expected. Four-wheel independent suspension, Koni Shocks, and disk brakes allow this car to perform as good as it looks — something for which FFR is known.

The interior is sparse as expected but does feature the one thing the original didn't have — AIR-CONDITIONING! Black carpet adorns the floor while the black leather seats featuring four-point harnesses are comfortable despite their racing look. The leather-wrapped dash has all of the working instrumentation one would expect from an FFR car. The reproduction Rosewood steering wheel fits comfortably in your hands. Looking rearward, you find safety components such as the roll hoop (padded in the right places), fire extinguisher, and kill switch within easy reach between the seats. Under the giant rear glass is a spare genuine Shelby American Wheel with a used racing tire that helps complete the race car look.

This car is truly as cool as it looks, and the owner spent much time making sure he built it correctly. Why is it being offered for sale? The owner enjoys "the build" more than he does driving his creations and is already on to the next. Great news for anyone who enjoys the drive better than the build! Come by Art & Speed to see this creation and take it home for millions less than the original!