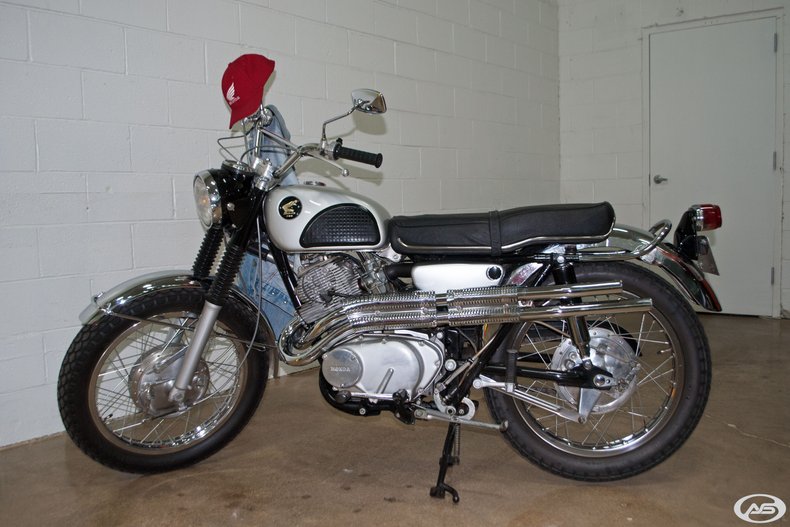 During the 1960s, the Honda Dream became a cultural icon. From college campuses to city streets, it was the darling of American youth. By the time the U.S. dirt bike boom began in the late '60s, Honda motorcycles were everywhere. They were being raced in the desert, ridden on trails all over America's campgrounds, and being pounded in competition across the U.S. And who could forget the famous advertising slogan, “You meet the nicest people on a Honda.”

Introduced in 1965, the Honda CL77 Scrambler became one of the most popular Hondas of the era. With its 305cc, OHC, 4-stroke, dual-carbureted engine, this bike cranked out record-setting power and emitted a memorable throaty rasp at high revs. The Scrambler was also equipped with a four-speed transmission, knobby tires, wider bars, and Snuff-Or-Not exhaust tips

Art & Speed is pleased to present this beautiful 1968 CL77 Scrambler. One of the last chrome-fendered examples, this bike is an almost totally original survivor. Owned for many years by a collector that had one in high school, this bike has been used sparingly on scenic rides, and has been lovingly preserved and restored as needed.

The paint finish is believed to be mostly original and is in remarkable condition with very mild patina (one side cover has slight paint wear from key fob rubbing). In addition to routine maintenance, one rear shock was replaced with a rare NOS item due to chrome pitting. The seat has no tears, and the exhaust system has been re-plated with new chrome.

This pampered piece of motorcycle history has been displayed in a temperature controlled showroom long enough and is now ready to put a smile on a new owner's face. Could that be you?