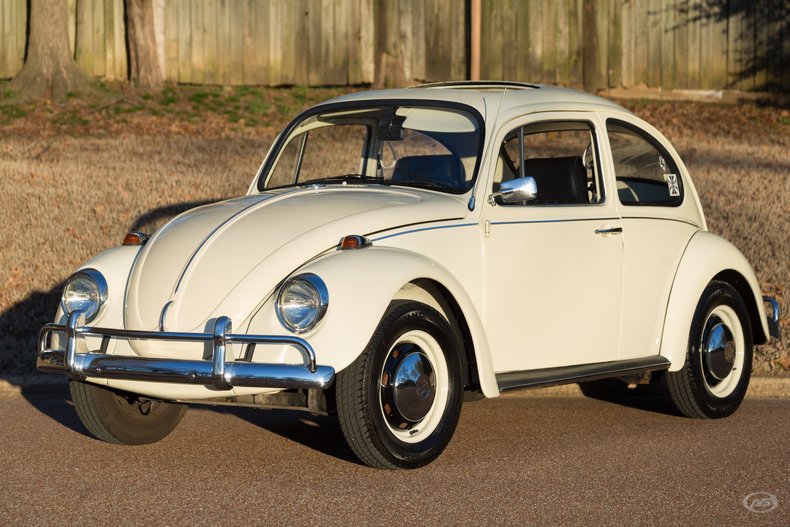 The Volkswagen Beetle was voted the fourth most influential car of the 20th century. It is the longest-running, most-manufactured car of a single platform ever made. More than twenty-one million Beetles were produced between 1938 and 2003, which if placed end to end, would almost be enough to circle the earth seven times - that's a lot of bugs!

For as many as were made, however, these days, it's hard to find one in the great condition of this 1969 Volkswagen Beetle. Over $30,000 was spent to bring this factory sunroof Bug up to snuff. A new crate motor was shipped in from California. Don's Upholstery was recruited to spruce up the interior. Kenny Faulk, the locally-based, nationally-renowned racer and Volkswagen mechanic performed the restoration. Gauges were replaced. The wiring is new. The transmission is new. The axles, brake system and suspension system have all been refurbished. Five-thousand dollars was invested in the paint job alone. And best of all, vintage 1967 fenders and bumpers were used to give this car the vintage Bug persona.

Here's the kicker though-this car wasn't built to win trophies. It does earn accolades in the form of regular thumbs-up from other drivers, but this Beetle was built to be driven. Since being restored, it's made the trip from Memphis to Nashville six or seven times, and was used for many years as a daily driver. At less than 19,000 miles, the replacement motor is just getting broken-in.

If you're a Beetle fan, you'll need no convincing. Come by Art & Speed and see if this Bug isn't the bees knees. If you've yet to join the worldwide experience of Beetle ownership, this fine ride might just be your ticket. Call (901) 850-0507 today. Financing available.

Contact us with questions about this car or any other in the Art & Speed Inventory.