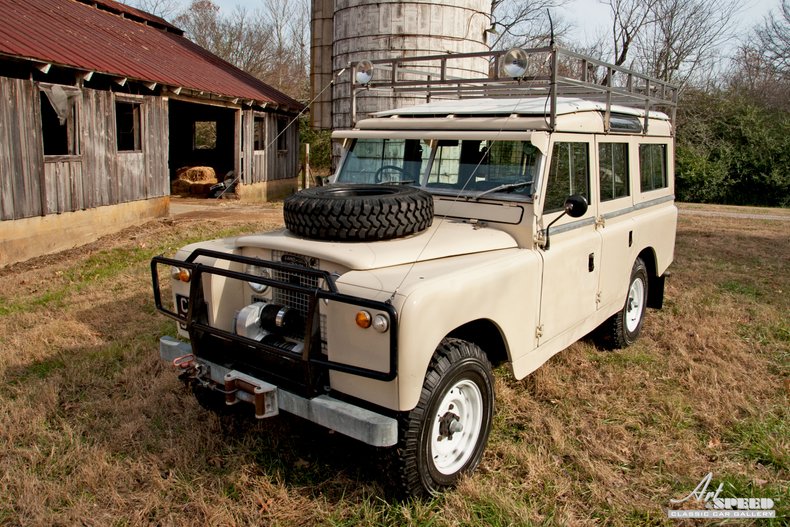 Zombie apocalypse? No problem. Go anywhere, anytime with this classic 1968 Land Rover Series IIA 109 4WD Wagon! Built to endure the harshest climates and terrain on Earth, the Land Rover has clearly established itself as the benchmark for all SUVs that followed. Instantly recognizable, this rare, right hand drive, four speed manual transmission Rover spent its early life in the UK before being brought to the US and restored in 1999. With an upgraded Rover V8 engine, this Land Rover is built to go anywhere you can dream in understated style and character. Rugged and some might say, sparse, this unique five-door sport wagon more than makes up for creature comforts with it's versatility. Originally designed to seat twelve (classified as a bus to avoid a British purchase tax), the Series IIA 109 literally put Land Rover on the map and is considered by many to be the most hardy. Appearing in many films and documentaries, such as “Born Free”, Land Rover capitalized on the Series IIA's popularity and manufactured almost 600,000. Land Rover boasts over 70% are still in use today, although it's extremely rare to see one in the States, especially in right hand drive.

Come by Art & Speed for a test drive you'll never forget. But hurry, as the market is strong for these reliable, iconic Land Rovers. When is the last time you saw one? Call 901-309-8899 for more information.