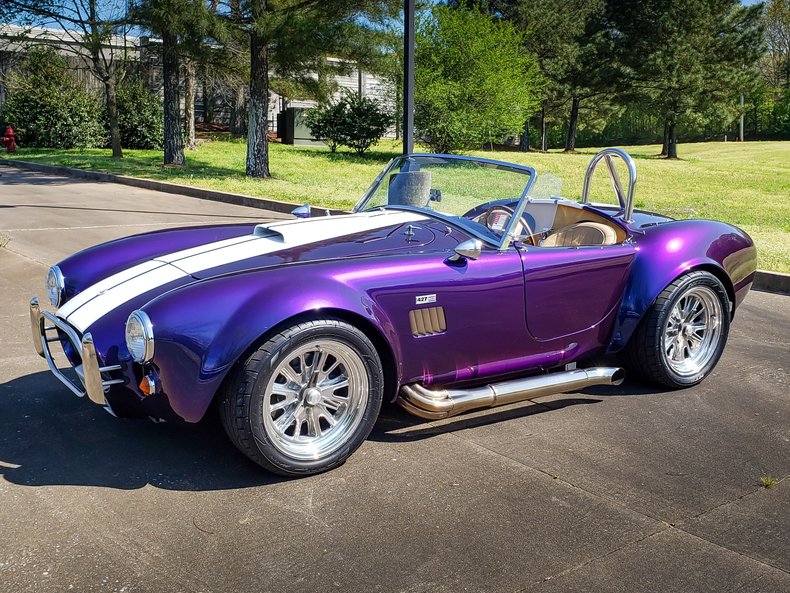 Everett Morrison is recognized on the World Manufacturers Index as an OEM manufacturer of Cobra replicas. This fourth-generation example is a “Phase 3” design produced as a finished, ready-to-drive automobile except for wheels, tires, engine, and paint. The owner did a spectacular job completing the build to the highest quality.

The original Cobra was always known for its brute strength and bare-bones racing pedigree. However, the fourth-generation Everett Morrison Cobra is built with a little more comfort in mind, especially for taller individuals. The Gen IV gives more width in the driver's foot box, repositions the pedals forward an inch, and subtly stretches the wheelbase three inches through the door area allowing for better ingress and egress for those over 200 pounds.

The chassis is where the Everett Morrison Gen IV version really shines with a four-inch stainless-steel alloy known as 3cr12. It is a highly engineered, handbuilt, TIG-welded masterpiece that doesn't need paint or powdercoat. Safety is also engineered into the car with the 21-gallon fuel tank completely surrounded by the sturdy frame. The cockpit is a fully surrounded cage with every part bolted to the frame or suspension and, along with the five-point harness, the twin door beams offer the greatest protection available.

As you can see, this car is built to drive, so what did the new owner add for motivation? Only the best would do, so he sprang for a Ford 427 side-oiler with twin 4V carburetors mated to a Richmond five-speed transmission for near bulletproof performance. An aluminum radiator with three electric fans keeps the engine cool on spirited drives while dual, baffled side-pipe exhausts expel more heat on longer treks. And unlike other Cobras, this one is built for both occasions.

The underpinnings are engineered for both performance and comfort with a Mustang II style front suspension with tubular A-arms and Aldan American single-adjustable, billet coilovers. It doesn't stop there, however; an 8.8-inch Ford independent rear is mounted via tubular rear suspension with double-adjustable Aldan coilovers allowing you to adjust the ride to the current situation.

Stopping power is not a problem with Wilwood power disc brakes at all four corners. You will also be happy to have the power-assisted rack and pinion when carving canyons or cones with the sticky brand-new 245/45/17 Nitto 555 on the front (315/35/17 rear) mounted on genuine knock-off wheels. The best part is most of the wearable replacement parts can be had at your local auto parts store so your mechanic can have you back on the road quickly.

As if a 427 Cobra doesn't make enough of a statement, the Candy "Purple Rain" Chameleon Finish will stop people where they stand. It is absolutely stunning and nearly flawless. As you walk around the car, the expertly-laid paint subtly changes from purple to blue depending on the angle of the sun. The chrome bumpers, trim, and racing mirrors accent the car perfectly.

Not only is the interior more spacious than the original car, but extra amenities await. The GEN IV seat is a specially engineered steel-frame suspension seat lengthened to provide additional thigh support but retains the full tuck and roll UV treated leather upholstery. Strapped in with the RJS harness, you will feel confidently secured in place. The dash, console, and doors are all fully trimmed; there's even a Pioneer stereo. But who needs music when you are grabbing that walnut Cobra steering wheel, checking the Smith tach and gauges, and listening to the sweet exhaust note echo through the canyon.

This car isn't perfect but it's also not a trailer Queen. With a little over 5,000 miles on the odometer, there are a few rock pecks, but surprisingly few for a car this low to the ground. And to that note, the underside could use a touchup of paint for someone who needs a concourse machine. But for the discerning driver who wants to drive and feel what Carroll must have felt, this is the car for you!

It's not often you can say “a one-of-a-kind Cobra replica,” but this is one occasion where we can. It is a stunner that drives as good as it looks! Give Art & Speed Classic Cars a call today before it is too late at 901.850.0507.